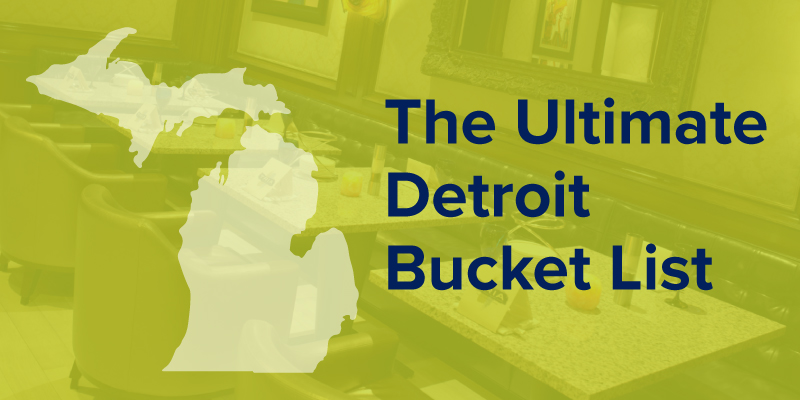 Detroit is definitely in the midst of an economic and cultural renaissance. After years of criticism and write-offs as a dying industrial urban center, all of us here in the Motor City have stood up and shown the world that we aren’t going down without a fight. And the world has started to notice.

But don’t take our word for it. Consider this report from the Detroit Free Press. The tourism industry in Michigan is growing, with an estimated 9000 jobs added to the tourism sector in 2015.

While no one can deny that Detroit is undergoing significant change, despite what the Nightly News reports, we know that the majority of these changes are for the better.

That’s why we aren’t afraid to take pride in Detroit. We know that there are many great things to do in Detroit, Michigan. It is a city rich in culture and history, and it’s buzzing with countless activities perfect for Detroit singles and families alike.

So if you are searching for what to do in Detroit, look no further. We’ve put together our ultimate Detroit bucket list to help you out. This list boasts an incredible variety of activities. Some are perfect for families with young ones. Some are great for singles looking to mingle. Regardless, they are all distinctly Detroit.

Don’t delay. Start exploring these exciting things to do in Metro Detroit today!

The best way to really start  getting to know Detroit is to explore its past. A great place to start is the Detroit Historical Museum, hosted by the Detroit Historical Society. Although most Americans are familiar with Detroit’s celebrated role as the capital of the nation’s automobile industry, there was much to this important city long before the car factories started production.

Detroit’s history starts with the interactions and barters between French fur traders and the American Indians who had long occupied the area. Moving forward in time, Detroit became an important stop on the Underground Railroad, as slaves sought to escape bondage in the South.

Of course, Detroit’s two most famous 20th-century exports are cars and Motown. Both are prominently on display here at the museum as well. The best part is the museum is free, so it’s easy for you to take your family, no matter your budget.

So plan a trip and really get to know Detroit’s past. It is a city rich with cultural diversity and economic power, and sets the foundation for much of what makes the cities so great today.

Everyone knows Henry Ford had a wealth of vision. Whether he was pioneering the assembly line or establishing an immersive historic park, Ford certainly left a significant mark on Detroit.

Housed at a massive museum complex named after its benefactor, Greenfield Village is a painstakingly reconstructed historical district. Drawn from the entire length of European settlement in the Americas, rather than a single moment in time, the homes and buildings cover an 80-acre site. The oldest buildings are from the 17th century, and each brought to the site from across the country, piece by piece.

Furthermore, these aren’t just run-of-the-mill buildings. As you stroll through the village, you’ll see the Wright Brother’s bike shop where they built the first airplane. You’ll also see the Logan Courthouse where Abraham Lincoln began his law career. There’s also Thomas Edison’s Menlo Park lab where many of his greatest inventions, including the light bulb, were first created. Also preserved here is Henry Ford’s birthplace, proving that Ford definitely didn’t lack confidence when he included his own memorial in the park.

Make sure to buy tickets online and save 10% on the price of admission.

While this isn’t a year-round attraction, the North American International Auto Show is the pinnacle event for Detroit’s most iconic industry. The show has been taking place annually for over a century, and it features displays of the most important automotive innovations in the world.

For gear heads, the NAIAS is a must-see. But even those who may not care deeply about cars will still find lots to marvel at. Special events within the show cater to particular automotive tastes. “The Gallery” is a display of the most luxurious cars in the world, such as Aston Martins, Bentleys, Lamborghinis and Rolls Royces. The presentation of the Eyes on Design Award will give the public a glimpse of the cutting edge in automotive design. There’s even an education day full of events catered towards students — a wonderful opportunity for young minds to experience firsthand the genius that fuels the auto industry.

In the end, if you live in Detroit, the auto industry is unavoidable. So embrace the Motor City and take the time to discover what really goes into this fascinating field.

If it’s the colder half of the year and you’re looking for things to do in metro Detroit tonight, you can do a lot worse than catching one of the most successful hockey franchises in the history of the sport. In fact, Detroit’s on ice success has earned Detroit the unofficial title of “Hockey Town.”

The fan experience at Joe Lewis is one of the best in all of hockey. One famed tradition — although it is liable to get you kicked out if you’re caught — is the throwing of octopi onto the ice. The tradition began in 1952. According to legend, the first octopus symbolized the eight games that a team had to win in order to win the championship. Even though management has tried to prevent the throwing of actual octopi, the symbol gains prominent status during playoff time.

Even without flying cephalopods, live hockey is unlike any other sporting event. It’s loud, as the cheers of rabid fans bolster the sounds of an organ. Additionally, the game is prone to violent intensity, as fighting is a common occurrence. The Red Wings have been performing so consistently over the years — they currently hold the longest active playoff streak in the NHL — that you’re sure to experience some of the best of the sport regardless of what night you attend.

We understand that Detroit has a bad reputation. If all you know about Motor City is what you see on the evening news, you are liable to get depressed. That’s where the Detroit Experience factory comes in. Their mission is to connect Detroit’s newcomers and long time residents with authentic Detroit experiences, changing the narrative.

The heart of their operation is their Welcome Center, which presents an excellent introduction to contemporary Detroit life. They also have thematically designed tours exploring such things as the Riverfront, the Detroit art scene, the culinary landscape of the city and Detroit’s innovative leadership in renewable energy and green industries.

You can also “build your own” tour, an approach that reflects their commitment to authentic exploration and discovery. If you’re looking for things to do in the metro Detroit area, this is a great way to get to know the city in a new and positive way! Contact the DXF and book a tour today!

When it comes to the artistic cutting edge, the Museum of Contemporary Art Detroit is taking the lead. It is a non-collecting museum, meaning the art on display is always shifting. This allows them to immediately respond to quickly shifting artistic trends.

The museum itself is quite new. Its first exhibition, presented in 2006, was entitled “Shrinking Cities.” In an effort to firmly root its artistic vision within the narrative of contemporary Detroit, the exhibition was curated in order to reflect the depopulation and demographic changes taking place within the city.

They don’t limit their cultural displays to visual arts. They also host exciting musical events and literary readings. Additionally, they have earned a reputation for excellent dance parties, which typically double as fundraisers.

They have a suggested donation of $5 for admission, which is more than fair considering the quality of art on display. However, they are quick to note that if the price of admission may discourage you from attending, they’d rather have you come and pay what you can. Check out their website for the latest descriptions of their exhibitions.

There is perhaps no place in Detroit that simultaneously represents innovation and deep and rich history. Pewabic Pottery, founded in 1903, is a National Landmark. However, it’s still an active pottery workshop, dedicated to educating new potters while also continuing to supply its signature architectural tile work to public and private designers alike.

Pewabic first earned its fame as a leader in the Arts and Crafts movement just after the turn of the 20th century. Their tiles, known for the iridescent glazes, appear across the country in some very famous buildings. These include Chicago’s Shedd Aquarium and the Basilica of the National Shrine of the Immaculate Conception in Washington D.C.

When it comes to Detroit’s music history, it all starts with Motown. There’s no better place to get a feel for the Motown sound than at the Motown Museum.

The museum itself, founded in 1985, has preserved the famed “Studio A,” where so many of the most recognizable tracks were recorded. It is also home to many notable artifacts, photographs and memorabilia from one of the most prolific and successful record labels in the history of pop music.

The main branch of the Detroit Public Library is an architectural wonder made in the Italian Renaissance style. The great library philanthropist Andrew Carnegie funded its construction. Even if you aren’t a reader, it’s a great place to take a walk and reflect on the past. The paintings and ornate marble are worth a visit all on their own. Moreover, walking through the library is free — then again so is a membership.

In this digital age, there is something wonderfully nostalgic about a used bookstore. No matter how intuitive our devices become, nothing can replace the smell and feel of an old book.

This is the largest used bookstore in Michigan, and it’s been a part of Detroit’s literary life since John K. King purchased the four story abandoned factory in 1983. Even that wasn’t enough space, as King recently bought the office building behind the main location. 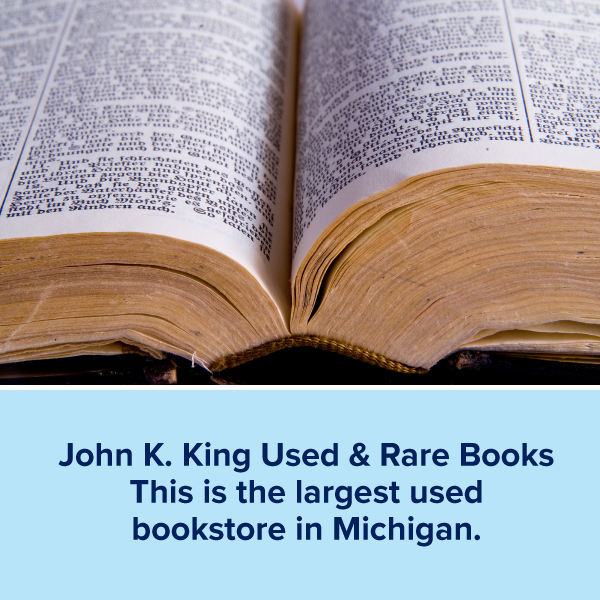 This is definitely a place to get lost in. The stacks go on forever and you can spend a whole day perusing their vast collection. If you love books, this is one of the best things to do in metro Detroit.

TRIA is an upscale American Brassiere. Our menu, driven by the local market, heightens our committed to serving the finest food made from the best ingredients available here in Detroit.

Our menu features such signature items as dry-aged Angus sliders, dill-seared salmon, the Lake Superior whitefish taco and a wide range of flatbreads and small plates.

All of our foods pair excellently with one of an extensive selection of fine wines and signature cocktails. Just like our food menu, our wine and cocktail lists are always transforming as our excellent mixologists let their creativity shine.

And don’t forget about our breakfast menu. We take brunch just as seriously as our dinners, and offer a wide range of finely prepared breakfast classics.

So if fine dining is on your list of preferred things to do in metro Detroit this weekend, make a reservation and taste, savor and share the wonderful flavors that TRIA has to offer.

We hope you’ve enjoyed this diverse guide to the ultimate Detroit bucket list. Whether you are visiting and looking for things to do in Detroit this weekend or you are a longtime resident trying to check some more must-dos off your list, we are excited to be sharing an authentic Motor City experience with you. With so many things to do in downtown Detroit and the surrounding metro area, it could take years to truly experience everything that this great city has to offer. So join us for a meal or maybe we will run into you as you explore the art, culture and history of Detroit. We look forward to crossing paths with you.